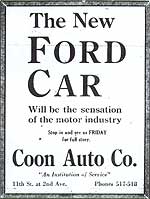 On December 2, 1927, the first day the Ford Model A was introduced to the general public, "Ford News" claimed that in the places where the new Ford was on display, over 10 million people saw the cars the very first day, about 10% of the total population of the United States. Within the first week, approximately 25% of the population saw the new Ford at their local dealers. Within the first two weeks, over 400,000 new car orders were placed and thousands of orders had been placed sight unseen in the months leading up to the anticipated December, 1927 unveiling of the new Ford Model A. In 1928, the Ford Motor Company produced 195 cars per day in January, by mid February that number had increased to well over 1,000, and by September, they were producing nearly 5,000 cars per day.

During WW II, many fell victim to the scrap drives either because of age, condition, or having little value. In South Dakota, along with other rural states, many were stored away in sheds, barns, and old garages to be rediscovered in later years. In the early 1950's, MARC and MAFCA began forming national clubs with the goal of preserving the Ford Model A of the late 1920's and early 1930's. The Ford Motor Company was most helpful to these fledgling organizations, providing them with accurate and much needed archival research to make sure that the Ford Model A's being restored were done in a safe and accurate manner. Today we have much information about the Model A, but it came slowly and with a lot of work and diligent research by the generation that has gone before us. Now it is up to us to continue the high quality and standards set forth by that generation and to pass on our love of the Ford Model A to the next generation.

On November 5, 1971, a group of approximately 25 local Model A owners began the process of contacting MARC in Dearborn, Michigan, telling them that they had a brand new group of enthusiastic Model A'ers in Sioux Falls, South Dakota who wanted to start a local club, using MARC's guidelines and who also had an interest in becoming affiliated with their national club.

This means that a lot of families have quite a bit of work ahead of them. The car, we hope, will become a family project. We plan to have many family events during the spring and summer months, such as picnics, tours and other activities that the whole family can look forward to." This appears to have been the basis on which this club was formed, and I believe that this was a good and noble purpose for starting the club. Even though many of our children are grown now, they can still remember many hours of riding in our beloved Model A's.

Many current club members are bringing their grandchildren to events, and I think that is great. They are passing on the experience of the Ford Model A to the next generation. Our goal as a local club has always been to bring people of shared interests together for education, exchanging of ideas, guidance on where to find parts, and help with the restoration process. We want to have as many local Model A's on the road as we can so that the younger generation will pick up where we leave off and continue the Dakota Territories Model A Club into the future.

Written by Gary Haugan, past president